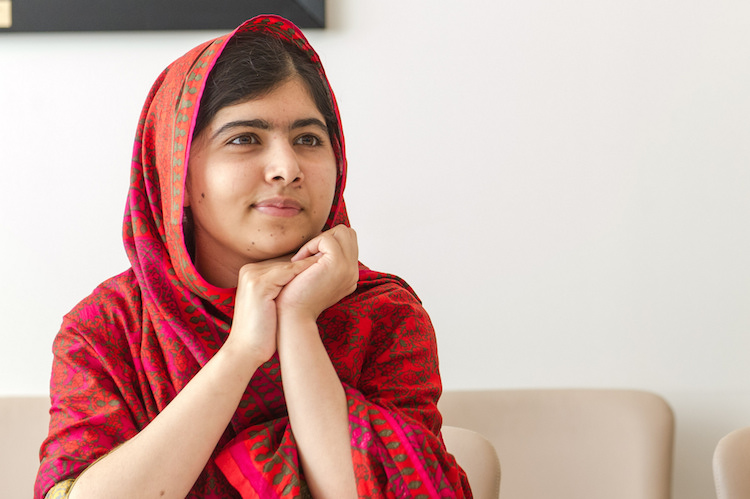 Malala Yousafzai is a household name; her efforts to further equality and education internationally have impressed figures from President Obama to Ban Ki-moon to Jon Stewart. Her story is an iconic one; a native of the Swat Valley in Pakistan, she grew up attending the girls school her father established. Once the Taliban presence in the area escalated, Yousafzai volunteered to run a blog for BBC about “living under the Taliban’s threats to deny her an education” under the penname Gul Makai. Eventually she was found out and threatened by the Taliban. She and her family thought nothing would come of the threat until that fateful day October 9, 2012, when, as she and her classmates were headed to school, a Taliban gunman boarded the truck and asked “Which one of you is Malala?” The rest is history; since her recovery in 2013, she has received endless praise for her efforts to bring quality education to girls in Pakistan, which has thrown related issues in the area into the spotlight. When she received the 2014 Nobel Peace Prize with Kailash Satyarthi for her endeavors to make schooling more accessible for boys and girls alike, no one was surprised; she’s won every other award in the book, from the Children’s Nobel to the Pakistani Peace award. She’d even already been nominated for the Nobel in 2012. However, as the years have passed and Yousafzai’s voice has ebbed from our consciousness, it is important to recall the causes for which she was willing to give her life: education and equality. As Yousafzai has grown, so has her mission: realizing the influence of drone strikes and regional terrorism on a quality learning environment for students, Yousafzai has expanded her voice to not only advocate for the education of her peers, but also for the safety of her countrymen. While she has represented the ongoing efforts to further equal education opportunities for children, her attempts to better the political situation for her country have been silenced by the Western media.

After she recovered in a Birmingham hospital following her attack, Yousafzai immediately used her international fame to bring her cause to a global platform. She met with the Obamas a year after her attack so the administration could “thank her for her inspiring and passionate work on behalf of [sic] girls education in Pakistan,” according to a public statement released by the White House. But the statement mentioned nothing of Yousafzai asking the President to stop the drone strikes in her home country; in her statement released by the Associated Press, Yousafzai says, “Innocent victims are killed in [drone attacks], and they lead to resentment among the Pakistani people. If we refocus efforts on education, it will make a big impact.” However, as these views are not in line with the United States’ interests, they were conveniently excluded from the President’s statement.

That year brought a great deal of fame to Malala Yousafzai; she was second on TIME’s “100 Most Influential People” list, she penned her memoir, “I am Malala”, and she spoke to the UN General Assembly on her birthday – Ban Ki Moon, secretary general of the UN, declared that day as “Malala Day”. She transformed from the girl who survived a Taliban attack on her life to a young woman who has so much more to say, but it seems that the West continues to take advantage of her, now casting Yousafzai as an envoy for south Asian peace. It seems that when awarding the prize, the focus of the Nobel committee was to emphasize that “a Hindu and a Muslim, an Indian and a Pakistan [can] join in a common struggle for education and against extremism.” Indeed, India and Pakistan have been engaged in warfare since their separation (and independence) in 1947. However, the border fighting will not stop because two advocates for children’s rights from their respective countries were awarded the Nobel Peace Prize, contrary to the committee’s wishes. We have distorted Yousafzai’s message and twisted it to reiterate western sentiments; she has been lauded and praised by global leaders, but they seem to remain unfazed and nonplussed by her actual point.

Perhaps this is why there has been considerable backlash towards Yousafzai and her dreams in her homeland, Pakistan. Many Pakistanis are proud of Yousafzai, but others accuse her of being “a western stooge, a CIA spy and even a prostitute.” While some of these insults stem from of an internalized misogyny, others are a cause of concern. As Yousafzai’s message was distorted by the west, it seems that she was as well; “although Pakistanis supported her cause, it had been “hijacked” by the “western saviour complex.” Pakistani journalist Assed Baig asserted, “Malala is the good native, she does not criticize the West, she does not talk about the drone strikes, she is the perfect candidate for the white man to relieve his burden and save the native,” he wrote, referring to the U.S. drone program that has killed hundreds of Pakistanis.” The truth of her convictions is real, but if her own fellow citizens do not see the validity of her claims, then all hope for the young activist is lost.

As the youngest recipient of a Nobel Prize however, Yousafzai still has plenty of time to make a lasting impact on the world. Yousafzai is unique in her youth and her sex as well as her drive to instigate change through the aspiration of becoming Prime Minister of Pakistan. Her idols, M.K. Gandhi and Martin Luther King, Jr., both preferred to influence society and politics from the fringes. She wants to follow in the footsteps of Benazir Bhutto, the first female prime minister of Pakistan, and one of the most celebrated leaders in the region. In aiming to become part of the political framework and aiming to change it from the inside, Malala Yousafzai shows her commitment to making the world a better place. 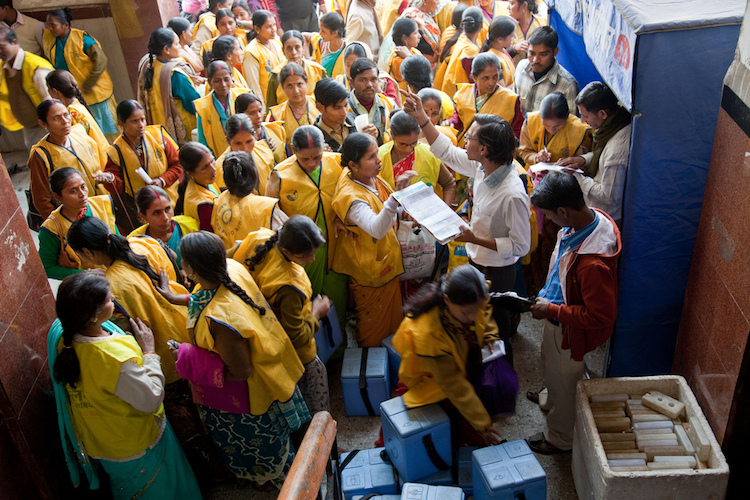 Behind all the media attention from the Syrian Civil war, another issue has emerged from the shadows. Previously thought to be globally eradicated as of 1999, polio is making a comeback among the war-ravaged Syrian population. The World Health Organization (WHO) says that polio has been eradicated from the entire world except for the nations of Pakistan, Nigeria and Afghanistan, where it has been slowly on the decline. However, polio has been on the rise in Syria and other Middle Eastern countries. As of November 26, 2013, 17 cases of polio have been confirmed in the region; by December 2, 2013, the number of cases had increased to over 60. A decrease in vaccine coverage in Pakistan lead to the conception of the Polio Eradication Campaign by the WHO in December 2012. The goal? To vaccinate all children in the region under the age of five against polio. In Syria specifically, this noble undertaking was executed with the help of the UN Children’s Fund and the Syrian Ministry of Health. The Global Polio Eradication Initiative is currently an all-encompassing movement that is operational in 200 countries with the help of national governments and various service organizations. Without the help of the Syrian Ministry of Health, the 4,000 workers would not have been able to mobilize themselves in Syria to help the 2.5 million children in 13 Syrian provinces.

However, the WHO stated in October 2013 that there have been 15 confirmed cases of polio in Syria, despite the efforts of the “Eradicate Polio Campaign” (EPC). Coincidentally, all 15 cases (now more than 60 cases) are all in the Deir Azzor province of Syria. This region was also excluded from the EPC vaccinations earlier this year, because the Syrian Ministry of Health claimed that “the majority of residents have relocated to other areas in the country” due to the ongoing civil war in the area. However, a local health official associated with the ACU (Assistance Coordination Unit; an organization that provides assistance to victims of humanitarian crises) says that, contrary to the WHO contention of 15 cases, there are actually a shocking 52 cases of polio among children in the region alone. In addition, there has been no Ministry of Health presence in the Deir Azzor province at all. It should come as no surprise then that the Deir Azzor province has been under rebel control since 2012, which is why there has been no Syrian-controlled polio aid, resulting in the apparent concealment of the true extent of the polio endemic. In essence, Bashar al-Assad, the Syrian dictator, can be accused of using polio to help suppress the civil war ravaging his country.

The WHO has stated that the strain of polio present in Syria can be genetically linked to the active Pakistani strain. However, the WHO also claims that it is not the migrating Pakistani militants who brought the disease to Syria, but the nomadic tribal groups that have allowed the disease to fester and grow in Pakistan. The virus has been dormant in the Deir Azzor province of Syria for the past 18 months, but the current instability from the civil war has yielded favorable biological conditions for the virus and prompted it to reemerge and infect local children. Similar conditions are present in the Khyber valley where the virus remains prominent in Pakistan.

It is interesting to note that the Taliban, through their extensive presence in the Pakistani region, has implemented a “jihad against Polio vaccinations,” and has taken to attacking various human rights groups administering polio vaccinations, which is why several polio aid workers in Pakistan have been attacked. This Jihad is mainly directed against polio vaccinators and other health workers, but is intended to lessen the number of U.S. drone strikes and attacks in the region. The Taliban is essentially holding its own children hostage to call for a ceasefire from the United States. Another reason that the Taliban is targeting public health groups (like the Global Eradication Initiative) is the death of Osama bin Laden. To confirm bin Laden’s location when he was in hiding, CIA operatives staged fake vaccination drives in 2011 to validate the presence of the family in the region. They compared blood samples from the vaccination drive with a blood sample from bin Laden’s sister, who had died previously in a Boston hospital. Obviously, the samples from Abbottabad came back positive and confirmed his presence in the area. However, this led the Taliban and native Pakistanis to harbor a massive distrust of health care professionals in the region, especially toward western health care organizations, which are now essentially disallowed. However, in a state that is predominantly Muslim as Pakistan is, polio vaccinations are bound to be required, as now all pilgrims to Saudi Arabia (location of both Islamic holy sites, Mecca and Medina) are required to have their polio vaccination shots before entering the country, according to the Saudi Arabian Embassy. This may pose a problem for any Pakistani citizens wishing to complete the hajj, or holy pilgrimage, which is a requirement for Muslims everywhere.

Without more aid and extended reach from the Eradicate Polio Campaign, the possibility that polio could further migrate from Syria and other areas of unrest to the developed world will become a very realistic one. Vaccinations are imperative for travelers and workers in affected regions, as well as unexposed children, though in the Deir Azzor province, the children might be hard to find. We can only hope that the WHO’s “Eradicate Polio Campaign” will prevent this highly contagious disease from taking further lives. This currently regional issue could become an international concern if not controlled.

Image by the Gates Foundation