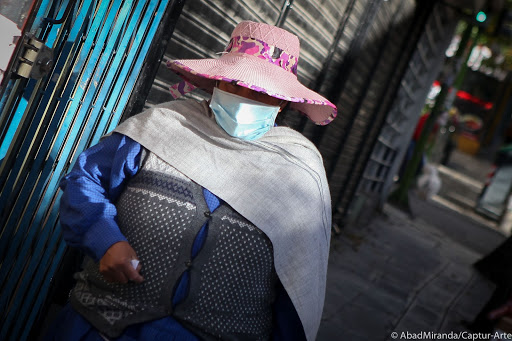 A Bolivian woman in La Paz covers her face with a mask to protect against COVID-19.
Credits: Abad Miranda

It seems that there isn’t anything new to be said that hasn’t been said already regarding COVID-19. Unprecedented. Once in a lifetime. Unforgettable. Most mainstream media coverage of the pandemic remains fixed on East Asia, Europe, and North America, the three geographical areas that have been hit the hardest. But viruses know no borders, and many smaller, poorer countries are being largely omitted from the coronavirus media narrative. These countries are often the ones most vulnerable to the virus’s externalities: lacking proper medical supplies, social welfare programs, and efficient governance to aid citizens’ health and well-being.

One such country is Bolivia, a landlocked country of about eleven and a half million people just north of the Tropic of Capricorn. Second only to Venezuela in poverty within South America, the country has endured many hardships in the past year: the devastating Amazon fires that burned 4.2 million acres of Bolivian land, a national strike that halted the country’s economy for 21 days in protest of fraudulent presidential elections, and now, a global pandemic.

Sofia Meador Sauto, a native of Santa Cruz de la Sierra, Bolivia, and fellow Political Science colleague of mine at UC San Diego, returned to her hometown in late March, and has witnessed firsthand the harsh socio-economic impact of the virus on an already struggling country. Just before she departed for home, I recalled her account of a Bolivian news story on the first coronavirus patient in Bolivia: a woman returning from Italy who was transported to the hospital with a jacket over her head to prevent the spread of the virus. Medical personnel had nothing else with which to cover her face.

The woman with the jacket over her head illustrates Bolivia’s dire health situation. Like many third world countries, Bolivia’s already strained government and economy lacks major resources needed to combat COVID-19. Santa Cruz de la Sierra, the country’s largest department with over three million people, had just 21 respirators available for coronavirus patients across all of its public and private hospitals. Even if more respirators were available, the district would not have nearly enough medical personnel available to equip patients with the machines.

Sofia’s mother owns two bakeries in Santa Cruz, one of which has already had to shut its doors permanently due to loss of revenue from the virus. “The economic situation for private enterprises is not good to begin with,” Sofia articulates. Even Panaderia Victoria, her mother’s second bakery which she co-owns with other family members, is experiencing harsh losses. “It’s not the same,” Sofia laments. “We’re not making the same earnings as we would on a normal day.” The employees of the closing bakery, Panificación del Oriente, will still receive severance pay for three months after their release, but beyond that there are little social welfare policies in Bolivia to protect them.

“In the US… the system can kind of support unemployment” she asserts. “Whereas here, if you’re unemployed, you’re f*****”. Although the Bolivian government does have social safety nets for the elderly, disabled, or pregnant, it does not provide any kind of unemployment insurance, leaving many citizens with few options for a source of income and bleak future career prospects. “A lot of people here make their living out of being bartenders, waitresses, you know… entry-level jobs, and those are the jobs that aren’t going to be opened until February or March”, she postulates.

Not only is the future full of uncertainty for many Bolivian blue-collar workers, but numerous businesses cannot bear the rising costs of operation much longer. Businesses had already taken a large hit economically from the national strike in the fall. “For the paro nacional, everything was closed for 21 days, so… you [business owners] were paying salaries and you were still paying taxes, and you were not generating any money”. The Bolivian government has continuously increased the social security contribution of employers for their employees, bringing total taxes on medium-sized businesses in Bolivia to account for up to 80% of profits. “Let’s face it, no private enterprise has earned any money since 2016,” she reasons.

“And for the Amazon fires, I don’t think it affected private enterprise, but it took a toll out of the government’s funds”. The Bolivian government shelled out a mere 20 million USD to fight the fires; however, almost 50% of Bolivia’s gross domestic product comes from services, which are now heavily restricted by the virus. International flights have been grounded indefinitely, and people are allowed outside only on certain days between certain times; not exactly an environment conducive to vacationers.

The case of Bolivia illustrates the especially all-encompassing effects of the COVID-19 pandemic on a developing nation. In the United States, many of us take for granted our social welfare programs such as unemployment insurance, or the fact that if we go to a hospital, there will be a doctor present there to treat us. Although the United States certainly has many issues with its social welfare programs, they are nevertheless there. The virus has further exacerbated the staunch discrepancy between the developed and underdeveloped world. In dozens of countries like Bolivia, there is no unemployment check in the mail, or a Paycheck Protection Program to apply for, something that many Western readers should be mindful of as we grieve over lost haircuts and manicures. There is an industry that we tend to forget about during the COVID-19 pandemic, despite finding itself in every country on earth: the sex industry.

Sex work provides income for over 42 million people worldwide. However, due to the COVID-19 pandemic, this “close-contact” profession is now banned, rendering many distraught, unemployed, and at high risk of contraction of the virus. Sex work takes many forms, but prostitution —  being paid for sex —  seems to be the most relevant when dealing with government laws and legislation.  Since prostitution is legally regarded differently by each nation, sex workers are facing the repercussions of the pandemic in vastly different ways. But despite the inconsistencies in the way sex work functions across the globe, it is certain that the coronavirus is drastically changing the sex industry landscape.

END_OF_DOCUMENT_TOKEN_TO_BE_REPLACED

Marketing Director Andrea Velazquez’s Friday Reading List is composed by several articles that discuss the various social and political effects the COVID-19 pandemic has produced around the world.

COVID-19 in The Philippines: The Case Against A Dangerously Inadequate Response: Contributing writer Lauryn Lin writes about the “highly militarized response” of the Philippines to coronavirus restrictions; and how the circumstances of COVID-19 are giving president Duterte room to broaden his regime of cruelty.