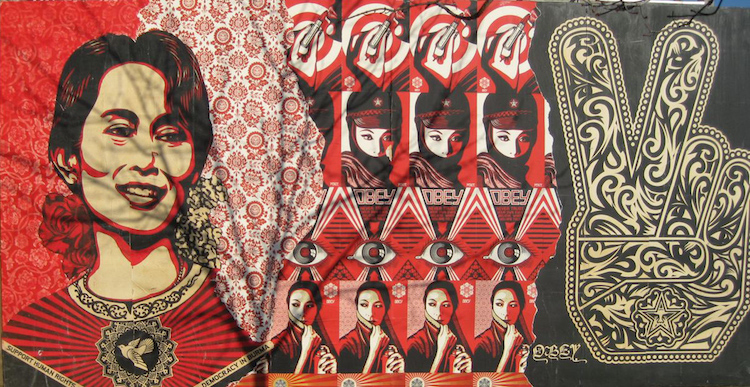 The National League for Democracy (NLD), a political party in the Southeast Asian nation of Myanmar led by Aung San Suu Kyi, swept the polls in the mid-November elections–the first open election in Myanmar since the nineteen nineties. This election is a historical landmark for Myanmar, which was previously under the leadership of an authoritarian military junta. A momentous and long overdue victory, these elections mark the beginning of the transition away from the iron grip of the ousted military junta to the promising future of the NLD.

Aung San, Myanmar’s champion of democracy, spent fifteen years under house arrest and was only released five years ago. She is a Nobel Peace Laureate and has drawn praise domestically and internationally for her grace and poise during her fifteen years under house arrest, which she underwent for her involvement as a protest leader in protests against the military junta. As perhaps the most famed political prisoner in the world with a streak of defiance, many look to The Lady, as she is commonly referred to, in hopes that she will address and find solutions to the communal violence and ethnic tensions that Myanmar is facing right now.

Indeed, ethnic conflict within the country is at a critical point. The ethno-religious minority that is native to the Rakhine state of Myanmar, the Rohingyas, willingly face unsafe conditions to flee by boat for neighboring countries in hopes that they will be welcomed and gain some sort of recognition from these countries. Since 2012, tens of thousands of Rohingyas have been killed in communal violence fueled by anti-Muslim sentiments and carried out by the majority group of Burmese Buddhists, including extremist Buddhist Nationalists in the country. Amnesty International has referred to the Rohingya people as “the most persecuted refugees in the world,” and they are a stateless people who are disenfranchised. As a result of this marginalization, tens of thousands of Rohingyas have decided to flee their home to seek better conditions elsewhere.

Aung San’s silence on the plight of the Rohingyas has drawn international criticism. In the past, The Lady has rejected the view that the crimes against the Rohingya constitute ethnic cleansing. She has also said to not “forget that violence has been committed by both sides,” and told international media to not “exaggerate” the situation. The only Rohingya-related issue that she has taken a stance upon is the two-child policy that some provinces in Myanmar implemented for Rohingyas that she believes are discriminatory.

The forecast for Rohingyas under the NLD does not seem optimistic. Aung San’s silence echoes the majority opinion that the Rohingya are Bengali immigrants or foreign aliens. Much of the base of support for the NLD comes from the Buddhist extremists that are carrying out the attacks against the Rohingya population.

For what are likely reasons of political expedience, it is unlikely that Aung San or the NLD will address the Rohingya issue. They are navigating a post-authoritarian political landscape where the military stills plays an active role in politics and will hold seats in the government even after the transition between parties occurs. If they showed active support for the Rohingyas or other Muslim ethnic minorities, it is likely that the loss of perceived political legitimacy would play into the interests of the military.

The NLD is walking a narrow line as it tries to move forward with the transition towards democratization in Myanmar. External forces are vying to hasten or slow this transition. Political actors, some domestic and some international, have varied expectations for the party. The NLD must balance outcries from NGOs about the Rohingya crisis, especially considering the media attention on the issue right now. They also have to deal with external imposition of ideals of democracy from the West and from investors in the state who may not have a complete idea of the situation domestically, and who have expressed discontent with the pace that Myanmar is democratizing at. They must maintain political legitimacy against a military regime that actively tries to detract from the legitimacy of their leadership. To do this requires the NLD to narrowly maintain viewpoints and policies that do not alienate their political base, much of which holds very anti-Muslim sentiments.

In this light it is unlikely that, under Aung San, the Rohingya peoples will see their cause furthered. While this provides hardly any consolation, it is also unlikely that violence from an institutionalized, state-led level will worsen. It is very probable that the state of Myanmar’s transition to democracy will be a positive force in the lives of the Rohingyas and other ethnic or religious minorities in the state. All of Myanmar will see tangible benefits from the transition to democracy from the previously brutal military government, and the NLD will likely lessen the active oppression on the populace that was experienced under the previous government. As state corruption and brutality decrease, the Rohingyas should experience marked improvement in their situation. This prediction must be taken with a degree of reservation, however, because it is unlikely that they will gain true state recognition and rights in the near future. This is not politically feasible in the current climate, which is why noted human rights champion Aung San and the NLD are avoiding the issue. It seems that, for this marginalized and persecuted group, the National League of Democracy under Aung San will not be a shining beacon of human rights advancement. Still, with Myanmar’s slow path of democratization, the Rohingyas can expect gradual increases in their rights and privileges and, hopefully, integration and acceptance into Burmese society.