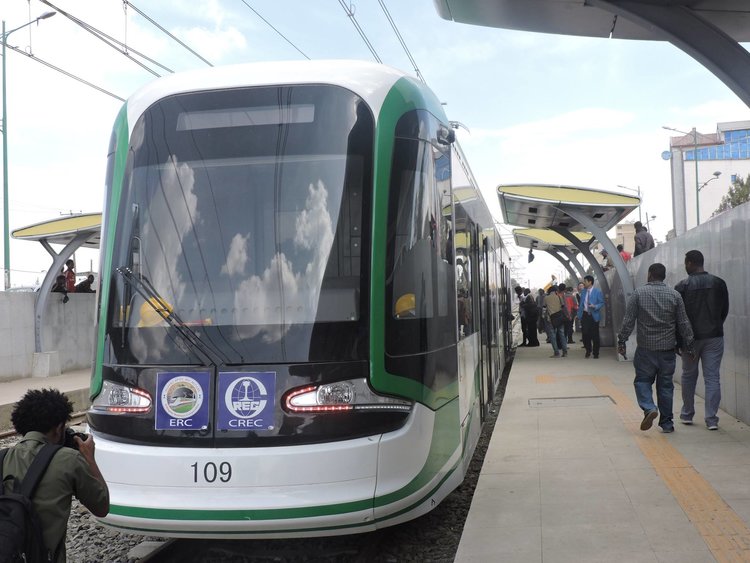 Addis Ababa welcomed a new mode of transportation for the city’s 3.3 million residents when its light rail system became fully operational in mid-September of this year. Servicing 32 stations throughout Ethiopia’s capital, the new light rail is the first of its kind in Sub-Saharan Africa and only the fifth intra-city rail system on the continent. Going into its third month of operation, an estimated 60,000 people already use the light rail on a daily basis, replacing some of the minibuses and auto rickshaws that have crowded Addis’ streets for decades. The prices are pretty comparable as well; a light rail ticket costs an average of 2 to 6 Ethiopian Birr (10 to 25 cents).

Construction on the first half of the light rail began in 2012 as a joint project between Ethiopia Railways Corporation, a government entity, and the China Railway Group, who received significant funding from the Export-Import Bank of China. All three will continue working together to finish the next two lines within the coming years. Construction has already started on a standard gauge railway connecting Addis Ababa to Djibouti, set to open sometime in 2016. The new Addis-Djibouti railway is partially a refurbishment of an existing line built by the French in the late 19th century that deteriorated in the aftermath of World War II. Ethiopia is a landlocked country with an ever-increasing manufacturing industry, and the addition of a new cross-country rail line can open up new markets for export.

Over the last decade, both China and Japan have contributed significant aid and expertise to developing Ethiopia’s infrastructure. Japan’s development assistance agency, JICA, has spent over $100 million on projects in Ethiopia, while the Chinese government has invested over $3 billion in Ethiopia’s infrastructure since 2002. These infrastructure projects are mainly related to energy, particularly dams used to generate hydroelectric power in the northern part of the country. A Chinese oil company was also in charge of an exploration mission in Eastern Ethiopia before members of the Ogaden National Liberation Front (ONLF), a regional separatist group, attacked and killed 74 employees.

The transformation of Ethiopia from a country known for wide scale famine to one with potential is mainly the result of a regime change. After two decades of civil war, Ethiopia finally ousted its dictator, Mengistu, and formed a new, non-communist government. Years of creating and rebuilding relationships with trading partners, both Western and East Asian, has led the country to an unbelievably high 7-10% annual GDP growth rate. Despite this, trouble still looms for Ethiopia, although the economy may be expanding. Ethiopia’s GDP per capita is still one of the lowest in the world. The literacy rate for the total population is only 49% and the majority of the population isn’t actually employed, but subsistence farmers. Despite this fact, more than half of the population lacks access to sufficient food due to a variety of reasons – including poor infrastructure. The roads and railways meant to connect Ethiopia have somehow bypassed its own citizens and headed straight for the border. The new light rail in Addis Ababa is a perfect example of this disconnect; nearly $500 million was invested in its construction, but only 3% of Ethiopia’s population lives in Addis Ababa. In total, 80% of the country’s population is completely rural, meaning they rarely benefit from development projects since they are typically targeted at cities and towns.

One of the biggest problems Ethiopia will have to face in the coming years is maintenance on these infrastructure projects built by foreign countries. As of right now, the main operator of the light rail is actually the China Railway Group. The same group is also contracted to operate the Addis-Djibouti line when it opens. Both railways were built with Chinese parts, as well as imported labor, with little input coming from the Ethiopian government. There is a high possibility that once China and Japan hand over the keys, the railways and roads may fall apart just as they did after World War II. In the meantime, residents of Addis Ababa can enjoy their traffic-free rail commute and decongested roads. It may not last long.