Note: This post was originally published at Prospect Journal’s blog, and can be viewed here.

Earlier this year, the public debate over the ratification of the new START arms control treaty between the US and Russia brought nuclear weapons stockpiles and American-Russian relations to the public consciousness for the first time in years. This is an issue too long forgotten — while fears of nuclear destruction are often mocked as an antiquated relic of the Cold War they are real, and are by far the most severe threat facing human civilization. Very few events have the potential to end the human race: an asteroid impact, unprecedented pandemic disease, nearby supernova, or nuclear warfare, and the threat of a global nuclear conflict is by far the most likely. But the recent renewed focus on nuclear arms control begs an interesting question: is the eventual eradication of nuclear weapons a realistic goal?

Reducing and ultimately eradicating nuclear weapons stockpiles is the stated goal of the US government. From President Obama’s 2009 nuclear proliferation speech in Prague:

“Some argue that the spread of these weapons cannot be stopped, cannot be checked — that we are destined to live in a world where more nations and more people possess the ultimate tools of destruction. Such fatalism is a deadly adversary, for if we believe that the spread of nuclear weapons is inevitable, then in some way we are admitting to ourselves that the use of nuclear weapons is inevitable.

Just as we stood for freedom in the 20th century, we must stand together for the right of people everywhere to live free from fear in the 21st century. And as nuclear power — as a nuclear power, as the only nuclear power to have used a nuclear weapon, the United States has a moral responsibility to act. We cannot succeed in this endeavor alone, but we can lead it, we can start it.

So today, I state clearly and with conviction America’s commitment to seek the peace and security of a world without nuclear weapons. I’m not naive. This goal will not be reached quickly — perhaps not in my lifetime. It will take patience and persistence. But now we, too, must ignore the voices who tell us that the world cannot change. We have to insist, ‘Yes, we can.'”

Of course, this isn’t a realistic goal. Most countries that possess nuclear weapons don’t have any real incentive to unilaterally disarm. While there are exceptions — small countries that don’t face any pressing security challenges or that comfortably reside under the American nuclear umbrella could judge the budget saving and international goodwill of abandoning their nuclear forces to be worth the political costs — disarmament doesn’t make political sense for most countries. The benefits that most individual nations would gain from disarmament are only worth sacrificing a nuclear deterrent if every other nuclear power sacrificed theirs as well. This is the collective action problem — global disarmament is only possible if every country on Earth trusted each other enough to, from their perspective, unilaterally disarm — that makes this type of global disarmament implausible. Individual nations simply don’t have the incentive to disarm when they don’t have a completely reliable way of verifying that their counterparts are as well, especially when other nuclear powers have a huge incentive to claim to disarm while actually retaining their weapons, giving then a powerful monopoly over nuclear weapons.

But what would a world without nuclear weapons actually look like, and is it a world worth striving for? Let’s imagine that, say, an unprecedented era of peace and trust among the world’s nuclear powers leads to universal disarmament without any nations secretly retaining their weapons. For at least some time the world is nuclear weapon free. Unfortunately, this global disarmament would likely have dangerous consequences. The deterrent power of nuclear weapons is a force for peace that shouldn’t be underestimated — it’s hard to believe that tensions between the US and USSR during the Cold War wouldn’t have escalated to a global shooting war if each country’s nuclear weapons stocks made the guaranteed costs of any war much, much greater than any potential gains. The logic of mutually assured destruction is less relevant today, but while global economic interconnectedness likely makes a major power modern global war too costly for any country eying the expected cost/benefit ratio of potential conquests the ultimate threat of global nuclear warfare is still a significant factor in the preservation of international peace.

The dream of global disarmament is an illusion because it simply wouldn’t last. It’s impossible to uninvent nuclear technology — any organization with sufficient funds and technical ability will be able develop nuclear weapons until the end of human history. Additionally, if the world’s major powers did decide to dispose of their nuclear arsenals small states would have an extreme incentive to develop nuclear technology. In the absence of a global nuclear deterrence a small state that possessed a monopoly over nuclear force would enjoy a powerful position on the world stage, able to essentially dictate terms to the global community without any real consequences. This incentive ensures that nuclear weapons will always exist: large nuclear powers have no incentive to completely disarm, and if they did smaller countries would quickly fill the void. Nuclear weapons will be with humanity until our end.

However, just because nuclear weapons will always be with us does not mean that the threat of global annihilation is. For a nuclear war to truly end civilization it requires a large exchange of warheads, likely in the hundreds. Despite their destructive power, bringing about the end of all human societies would require many nuclear detonations to kick enough dust and soot into the upper atmosphere to create sufficient global cooling to end human agriculture. This doesn’t mean a smaller nuclear war wouldn’t be horribly destructive. A smaller nuclear exchange would be an unprecedented disaster that would immediately kill millions, and potentially billions indirectly in the long term. A limited nuclear war involving dozens of warheads between India and Pakistan would likely spread enough radioactive fallout to depopulate much of South Asia, create sufficient global cooling to disrupt global agriculture and cause mass starvation for decades, and dramatically increase global cancer rates through radioactive fallout and atmospheric ozone destruction. This limited exchange would be the largest catastrophe in human history. However, it’s important to remember that this limited war wouldn’t involve all of India and Pakistan’s nuclear weapons — the authors of the studies demonstrating limited nuclear warfare’s effects modeled 50 small nuclear detonation, while the combined arsenals of India and Pakistan could be over 150 weapons. A full-scale exchange between the two belligerents would be unimaginably devastating.

Despite its truly unprecedented destruction, a nuclear exchange between belligerents with comparatively small arsenals would be a survivable calamity for humanity. Billions would likely die from starvation or radiation induced cancer in the decades after a small nuclear war, but human civilization would eventually recover. The same isn’t true for a nuclear war between adversaries with large arsenals. In the modern world this means five states: China, the UK, and France, all of which possess under 300 warheads, and the US and Russia, both with much larger arsenals. Though the American and Russian arsenals have been greatly reduced since the Cold War, each nations’ active warheads possess a destructive capacity to end most macroscopic surface life on Earth many times over. A nuclear war between nations with arsenals in the hundreds would certainly not be survivable for human civilization and possibly for our species itself.

Moreover, these five nations that possess the technology most likely to start an accidental nuclear war. Most of these nations’ strategic nuclear forces are mounted on ICBMs, the intercontinental missiles with the ability to deliver multiple warheads across the globe in a half hour. The destructive capacity of one missile is unimaginable — one mistaken launch could murder ten million people, and once a missile has launched there’s literally no way to stop it. Most of these missiles are still armed and targeted, and every single day these weapons exist there is a chance, if a small one, of some mistake or accident sparking the end of humanity. It could be a mistaken computer that warns Americans of an incoming Russian attack that doesn’t exist. Caught in this situation the officers in an Air Force command bunker would face enormous pressure to launch their own missiles before verifying if the Russian ones were even real. If the officers hesitated their own missiles could be destroyed on the ground, preventing a full American response. It’s this perverse logic that makes accidental nuclear destruction a real risk. Even small mistakes — a faulty computer program, garbled communications, a rouge officer — could easily escalate into a full exchange. The whole delicate logic of the entire nuclear balance makes this a frighteningly likely outcome. Sure, there are safeguards. But everyday nuclear arsenals exist this risk exists, however small, and every single day we gamble the future of humanity. President Obama posed the admission of nuclear weapons’ permanence as an admission of the inevitability of their eventual use. Unfortunately he’s likely right. Because nuclear weapons will be with humanity into the distant future it is likely that, over a long enough time frame, one day they will be launched because the small likelihood of an accidental of intentional nuclear exchange becomes more and more probable the longer nuclear weapons exist. But this admission of some kind of future nuclear war isn’t an admission of the inevitability of humanity’s destruction. A limited nuclear war would be survivable. A large one wouldn’t, and that’s the type of apocalyptic exchange we should work hardest to prevent.

This is the fundamental calculus of nuclear destruction. The extinction of humanity requires multiple nations to have large nuclear arsenals because the complete end of human society requires a certain minimum number of nuclear detonations, enough to spark a nuclear winter that ends agriculture and wipes out most of the Earth’s biosphere. This requires large arsenals, probably bigger than those of India, Pakistan, Israel, and North Korea. Together these countries’ destructive capabilities could probably end humanity but their smaller, separate arsenals greatly reduce this risk. A higher total number of nuclear powers do increase the risk of a regional nuclear conflict, but it is the large arsenals of the US, Russia, China, and the Europeans that poses the greatest threat of human extinction. These are the arsenals we need to immediately reduce. This is possible — the number of warheads needed for an effective nuclear deterrent is less than the minimum that risks the end of humanity. That’s why the new START treaty was so important. Nuclear weapons will always be with us, and some form of nuclear conflict will probably threaten our descendants’ future. But even small reductions in the arsenals of the US and Russia reduce the chances of an exchange devastating enough to end human civilization. Every chance we get to reduce this risk is one we have a responsibility to take. This is a gamble we can’t afford forever. 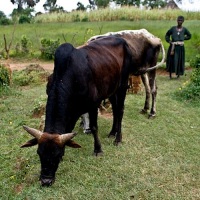