As we greet the new decade with the greatest international health crisis in modern history, society is braced with the shift into an era of social isolation and greater need for psychiatric treatments. Meanwhile, vanguard movements towards alternative medicines and psychedelic therapy have already started gaining momentum in the healthcare industry and scientific community.

The new coronavirus (COVID-19) is not only causing a global pandemic, but it’s also catalyzing the mental health crisis that until now, slipped under the radar. Some economists predict this outbreak will cause the greatest economic recession since the Great Depression, and further exacerbate existing mental health conditions while also giving rise to new ones. COVID-19 is affecting the mental health and productivity of America’s workforce all over the country.

With hospitals understaffed and suffering mass shortages of critical equipment all over the world, we are witnessing society embrace more unconventional approaches in order to respond to growing challenges in the medical field. In the wake of such an unprecedented disruption to our healthcare system, the role of alternative medicine in attending to mental health journeys to center stage and makes way for the advent of the psychedelic movement.

Societal wellbeing is undergoing serious structural shocks. With the Federal Reserve reporting that as many as thirty percent of the population could lose their jobs by June of this year, and many more facing financial losses, the overshadowing psychological toll is not far behind. Under indefinite periods of social isolation and increasing loss of civil liberties, human coping mechanisms for dealing with the daunting feelings of financial instability make way for challenges to mental health. In the midst of so much uncertainty, the previously underground movement of psychedelic research and development take a step into the limelight.

Earlier this year, Johns Hopkins University, the oldest research institution in the country, inaugurated the Center for Psychedelic and Consciousness Research; one that is solely dedicated to the study of psychedelic substances and impacts on cognitive behavior, while focusing on treatment of mental disorders like anxiety, depression, and post-traumatic stress disorder (PTSD).

The study of psychedelic treatment in neuropharmacology, while not a new topic, is undergoing a paradigmatic shift, distinctly expanding the perception of its potential benefits to society. With international healthcare advocacy groups calling for bureaucratic easing in matters pertaining to medical discoveries, and the creation of a vaccine to fight off the new strains of the Coronavirus, many states are— for an indefinite period—  no longer requiring in-state medical licenses for healthcare practitioners. In light of this recent breach in regulatory enforcement, some medical companies are seizing the opportunity to reach wider audiences.

This past January, the Green Market Report launched the first Psychedelic Summit in history. Taking place in New York, the sold out event produced the industry’s first financial analysis and trends report. Drawing attention from health care practitioners, to researchers, to venture-capitalists; the industry presents itself as a prime emerging market for capital investment.

One Manhattan-based company, Mindbloom— which offers guided psychedelic therapy treatments using ketamine—  is switching over to telemedicine and are already making plans to expand access into more states.  In an interview, CEO and company founder Dylan Beylin commented on the pandemic bringing in an influx of new patients.

“Coronavirus is, without a doubt, the number one public health crisis in the United States.” Beylin said. “We’re in a state of emergency and seeing a demand for treatments for anxiety and depression on Mindbloom, a skyrocket since the onset of coronavirus.”

Beyond association with any specific treatment or substance, the psychedelic movement is broadening the scope of companies in the field. In 2017, the FDA assigned a “Breakthrough Therapy Designation” for MDMA-assisted psychotherapy for PTSD.

The vanguard movement of embracing psychedelic therapy is one that is gaining increasing visibility. Another prominent example is Daniel McQueen. Holding a Master’s in Transpersonal Psychology from the University of Naropa, McQueen is one of the first to go public with his work in the field of psychedelic assisted therapy. Based in Boulder, Colorado, McQueen opened the Center for Medicinal Mindfulness in 2014, the first legal psychedelic plant medicine clinic in the United States.

Back in February of this year, the local chapter of the Aware Project hosted a talk with Daniel McQueen. The event was held at UC San Diego’s Altman Clinical and Translational Research Institute, where McQueen spoke on his experience on “Coming Out Psychedelic” as a psychedelic specialist, and activist in the community. As a grassroots education and advocacy group, the Aware Project regularly hosts events with researchers, healers, and drug experts to give workshops and normalize the spectrum on psychedelic potential and psychological healing.

The new era of normalizing the spectrum is not a phenomena exclusive to the United States. The international community is well aware and many countries are ramping up investment and innovation. In China, just last year, a biotech company in Wuhan opened the research division M2BIO to study psychedelics. Fast forward to this year, the Global Drug Survey released a landmark study on “how ‘drugs of abuse’ are becoming new medicines.”  Additionally, at the federal level, the countries that have decriminalized psilocybin thus far include the Netherlands, Brazil, the United Kingdom, Portugal, Peru, Jamaica, and Native American reservations in the United States.

The reality on the other end of the spectrum however, remains bleak. Legislation on psychedelics still undergo intense political backlash and stigmatization by critics in mainstream discourse, and many of these substances remain categorized as Schedule 1 drugs in the United States. In spite of the schedule 1 restriction, several places throughout the country are reopening clinical research at the state and local levels.

Psilocybin for example (the chemical compound found in certain families of wild fungi or “magic mushrooms”) is still illegal in all 50 states on the federal level, but was locally decriminalized in cities like Denver, Colorado and Oakland, California. Currently, there are campaigns happening in the states of California, Oregon, and Washington D.C. calling for the right to vote for the decriminalization of psilocybin on the November 2020 ballot.

While more studies are needed to understand the effects of LSD on the brain or the Silicon Valley trend of microdosing on psilocybin, it is clear that the field of psychedelic medicine is opening up society to medical breakthroughs in the treatment of mental conditions. According to Statista, as early as 2018 roughly 64 percent of the world population have used some form of illegal drug. Meanwhile, entire continents are dealing with mass economic and societal disruption caused by the new Coronavirus. With no clear end in sight, responding to the COVID-19 crisis by increasing access to behavioral health and mental healthcare treatments through psychedelics will be vital to America’s resilience in this moment of time.

2 thoughts on “Amidst a Global Health Crisis: COVID-19 & The Advent of The Psychedelic Movement” 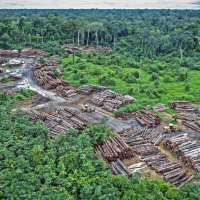