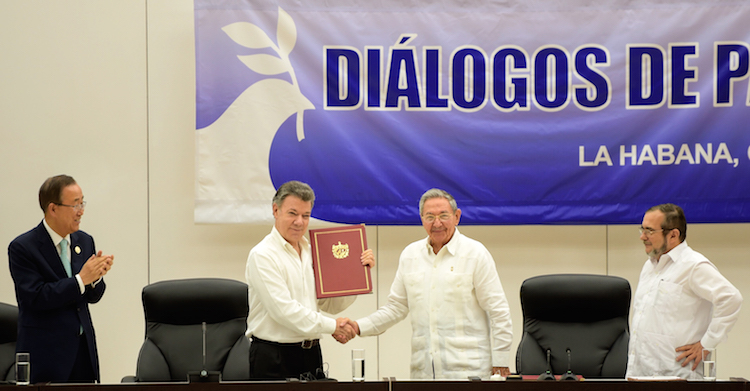 It will be  a milestone in human history when an entire half of the globe sees an end to war. We could be closer to that milestone than many would think. The Western Hemisphere has been a mostly peaceful place since the mid-1990s, when the end of the Cold War led to numerous peace treaties and the implementation of full democratic rights in several Latin American countries. Today, the Americas list only one major ongoing conflict. Relegating war to the history books of our Western Hemisphere is close, but remains elusive.

On October 2, the Colombian people rejected a peace agreement that would have ended the longest-running conflict in Latin America. The implementation of the agreement between the Colombian government and the Revolutionary Armed Forces of Colombia-People’s Army, know as FARC-EP, would mean the end of ingrained terror that disproportionately affects Indigenous, Afro-Colombian and rural peasant communities. While the rejection of the peace agreement may seem baffling, it does not represent the rejection of peace itself. Those who objected to the agreement believe that the current terms were not conducive to sustainable peace for very legitimate reasons. This week, despite doubts that the process would move forward, a revised agreement was announced and released, which includes important concessions on behalf of the FARC-EP.

History and the Effects of Armed Conflict

The FARC-EP is a Leninist-Marxist group formed in 1964 with the original intention of addressing the needs of rural communities hitherto neglected by the Colombian government. Shortly after forming, they began providing social services to “loyal communities” and soon entered the international cocaine trade to fund their exploits , rapidly expanding their power and numbers.

Over 50 years of conflict have exacted a tremendous human cost on both sides. The FARC are responsible for kidnappings, murders, sexual assault, the use of child soldiers and inhumane treatment of combatants, among other crimes. The FARC are believed to be responsible for as many as 90 percent of the 27,000 kidnappings that occurred in Colombia between 1970 and 2010. Military forces are also suspected of at least 3,000 cases of “false positives,” in which civilians were killed and included in the death count of guerrillas. In total, the conflict has left up to 260,000 dead , over 45,000 forcibly disappeared and almost 7 million people internally displaced. These statistics are accompanied by very real grief, fear and profound absences of all those lost. The conflict has created a divided and wounded country, which will require great strength and unity in order to heal itself.

Past Attempts at Peace

Previous attempts at peace have been strikingly unsuccessful. According to Stanford’s Mapping Militants project, the first effort came in 1982 in the form of the Uribe Accords, which attempted to gradually reintegrate FARC-EP members and provided political participation via the formation of the Patriotic Union, known as UP. This peace initially appeared quite successful, but was circumvented by the assassination of thousands of UP leaders, including two presidential candidates, by the Colombian military, paramilitaries and drug gangs. Meanwhile, kidnappings and violence by the FARC-EP continued.

In 1999, after mass protest against the continuation of the conflict, the FARC-EP initiated peace talks again. This time, peace was thwarted by a $9 billion U.S. military aid program intended to reestablish the authority of the Colombian government and combat the drug trade. During his presidency from 2002 to 2010, Álvaro Uribe embraced harsh policies against the FARC-EP and the drug trade. He embraced U.S. aid and the involvement of paramilitaries, who were also responsible for human rights atrocities.

The Current Agreement: Rehabilitation vs. Justice

The current agreement is based off of negotiations between representatives of the Colombian government and FARC-EP, including FARC-EP leader Timoleón Jimenez and Colombian Pres. Juan Manuel Santos, which took place in Havana, Cuba over the last four years. The agreement outlines a plan for peace based heavily on development and rehabilitation and is divided into six main points. The first point establishes “Rural Integral Reform,” meant to close the gaps in development and economic and social rights between urban and rural communities, the latter of which  have been more affected by FARC-EP violence and control. Point two focuses on the broadening of political participation and the strengthening of pluralism within democracy in order to avoid violent conflict as a means of political action. This is intended to lay the foundation for sustainable peace in the face of ever-present political divides. Point three establishes the definitive call and implementation for bilateral ceasefire and the reintegration of FARC-EP into the “social, economic and political life of the country.” It also includes “security guarantees” for the protection against criminal organizations including “successors of Paramilitarism,” which, as stated before, have proven to be violent actors against peace. The fourth point deals with the dismantling of the illicit drug economy which has long had a hold over Colombia’s rural communities and has fueled more than one of its violent internal conflicts. Point five emphasizes the priority of victim’s rights to truth, justice and reparations, as well as the importance of including victim’s voices in the negotiation and implementation processes. The sixth point outlines mechanisms for implementation of the agreement.

It is the fifth point which raises the most contention. While the agreement claims to prioritize “non-repetition” and condemns impunity, its plan for dealing with those who have committed crimes in connection with the conflict do not seem to uphold those values. On the contrary, “The Special Jurisdiction for Peace” may grant amnesty “as widely as possible” to those whose crimes are less grave than crimes against humanity, genocide, etc. Even more concerning, those guilty of grave crimes such as those stated above as well as torture, forced disappearances and extrajudicial killings, who admit to their crimes will spend no time in jail, instead receiving limited sanctions on mobility and freedom between five and eight years. They will also be required to participate in projects meant to repair the damages they caused. Non-governmental human rights organizations such as Human Rights Watch and Amnesty International point out that this violates international law, which requires states to punish human rights violations in proportion with the severity of crimes committed. Chief government negotiator Humberto de la Calle stated in the announcement of the accord that “many Colombians would want punishment for the FARC. But also, with the same fervor, we would have to ask the same punishment for all responsible… [including] state agents who deviated from their mission, and third parties who financed serious crimes and massacres.” One wonders whether amnesty for the FARC-EP is granted only in return for amnesty of government and military officials, or to avoid embarrassment for the quiet, mild extradition of paramilitaries in 2008. Holding the state responsible for its own atrocities would be equally as important in assuring that new conflicts do not arise.

It is difficult to know whether the outcome of the plebiscite truly reflected the desire of the people, for various reasons. First of all, voter turnout was only 36 percent, and the “No” vote won by less than one percent. The triumph of the “No” vote was a surprise to most, who expected the “Yes” vote to win by a large margin, as it had in national polls. Those who supported the agreement in theory seemed to have not shown up to make it happen, for reasons that are perhaps less clear. Assistant Professor Robert Karl at Princeton University suggests that heavy rains and flooding from Hurricane Matthew may have been enough to deter voting in some areas. There was also an important regional difference of opinion between rural and urban communities, though the cause for that difference of opinion is debatable. Colombiapeace.org claims that the difference is indicative of the privilege of cognitive dissonance from the actual effects of the conflict among urban voters. They state, “areas where conflict, violence, and displacement run rampant voted in favor of the peace accord, as did the majority of the zones where victims, indigenous peoples, and Afro-Colombians live.” However, this could equally indicate a fear on behalf of rural communities who are more likely to be pressured by the FARC-EP.

Developments Since the Plebiscite and How to Move Forward

After the plebiscite, President Santos won the Nobel Peace Prize, which may have encouraged continuation of negotiations despite the “No” vote. Meanwhile many Colombians took to the streets after the vote to demand peace. Both the FARC-EP and the government have stated that the ceasefire will continue.

On Sat. Nov. 12, a new final agreement was announced. The new agreement addresses some of the concerns of those who voted against the original accord. Among other changes, the new accord tightens restrictions on liberty for those who confess to crimes against humanity, allows only Colombian judges to serve in the Special Jurisdiction for Peace, which is responsible for trying crimes against humanity, and holds commanders more responsible for the actions of their subordinates. It also expresses more boldly commitment to gender issues and requires disclosure of information about the FARC-EP’s assets. Whether these changes are enough for those who rejected the original agreement is yet to be seen, but it might not be up to the Colombian people this time if President Santos goes straight to Congress.

Colombia’s conflict with the FARC-EP is not its only source of turmoil or violence, and finding resolution to the conflict has been marked with great uncertainty. Still, these recent events shed a hopeful light on a difficult moment in Colombian history. Since the agreement was announced, we have seen the Colombian people fight for, rather than against each other. Still, it is clear that the wounds created by the conflict are too large to heal immediately or perfectly. Colombia will never forget the wrongs done in the last 50 years, forgiveness will take time and hard work, and peace may be fickle at first. The spirit that got the Colombian people through these violent times, and into these negotiations, will surely carry them on.