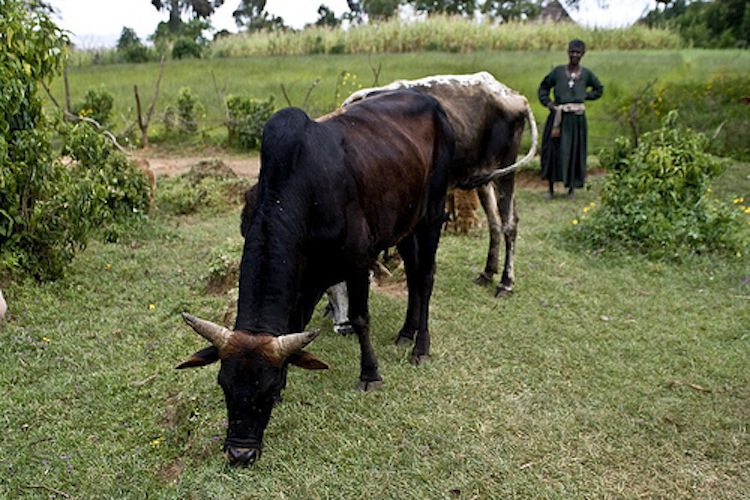 The issue of agro-imperialism – defined as foreign usage of agrarian land for the purposes of commercial food production – in modern Ethiopia leads directly to the cultivation of cash crops, which not only has the possibility of inducing famine, but can also confine the country to impoverishment and stunted development. The problem’s current context stems from the country’s predisposition to food shortages in the last half-century. Because of the severity of the 1980s famine in Ethiopia, the government now encourages policies aimed to prevent famine, relying on foreign investment to reinvigorate the country’s agricultural sector.

However, currently implemented policies, combined with country-specific initiatives proposed by the United Nations, have the potential to exacerbate development and induce another famine. Agro-imperialism’s relatively new emergence as a development problem poses difficulties for analysts to formulate suitable policies. While Ethiopia can either continue its support for foreign agribusiness or halt the practice entirely, the country should take an intermediate standpoint, in order to extract benefits from policy perspectives.

To address Ethiopia’s exposure to agro-imperialism and effects on development, the issue must be resolved at the local and international level. At a local level, policies should focus on solving the problem within its historical context and establishing an appropriate balance between all of the current policy options. Because Ethiopia’s history of severe famines left a lasting legacy on contemporary policy decisions on preventing food shortages, some of which are counterproductive to preventing famines, the government should look to neighboring African countries with a similar history for policy guidance. The Rights and Resources Initiative acknowledges that “controversial land deals will trigger civil unrest, as has already been the case in Sudan, Liberia and Sierra Leone” (Trávnicek). Sierra Leone, a country known to be afflicted by food shortages within the last decade, has already experienced large-scale public protests as farmers were subject to controversial land deals that led to displacement from farmland, with no tangible outcomes of increased exports or opportunities for employment resulting from foreign investment (Provost). By examining a neighboring country that historically faced a similar issue of food shortage, Ethiopia’s government should consider the potential for civil unrest and the possibility that foreign investments may not yield promised results of elevating land productivity.

Rather than adhering to a policy that openly encourages agribusiness or one that freezes all foreign land investments, Ethiopia should instead draft a policy that draws positive aspects from both perspectives. A potential resolution to Ethiopia’s current dilemma of agro-imperialism is to examine current land availability and to regulate distribution to foreign investors. Careful analysis of available land would prevent the loss of livelihoods through displacement of farmers and pastoralists. Domestic agriculture would still be intact as the country’s source of subsistence, as land is kept for food crops, rather than cash crops purposed for export profits.

Because the inflow of foreign investors will not be disrupted by the proposed policy, Ethiopia will additionally be able to benefit from technological innovations that are brought into the country by investors. Moreover, Ethiopian governmental regulation of land distribution to foreign interests would prevent the reoccurrence of a previous debacle, in which “[t]he boundary of Karuturi’s land wasn’t accurately mapped when it was first leased by the Gambella Regional Government in 2009” (Davidson). Ensuring that foreign investors are limited to a specific plot of land would further inhibit unwarranted foreign encroachment upon land already owned by domestic farmers and pastoralists. By allowing foreign agribusiness in a strictly regulated form, Ethiopia can reduce its risk of famine by having a sustained domestic agriculture industry and assimilation of foreign technologies, while preventing displacement of agrarian communities.

At an international level, the United Nations should reexamine its recommended policies for achieving development goals that emphasize poverty reduction; rather than promoting a “one size fits all” solution, PRSPs should be specific to the conditions of the country in consideration. Currently listed policies, such as “[r]apid export growth through production of high value agricultural products and increased support to export oriented manufacturing sectors” only serve to elevate the risks of famine, since allocation of land for cash crops and the promotion of agribusiness reduce domestic food stocks and place domestic farmers at a disadvantage to larger, collectivized farms, respectively (Ababa i). The United Nations should consider causal factors of the 1980s famine when proposing development goals. A revised version of the PRSP that accounts for Ethiopia’s risk factors for famine can be effective in encouraging development within the country through reinforcing Ethiopia’s policies aimed to combat food shortages.

Adoption of the proposed policies at local and international levels will nevertheless face challenges to implementation, because short-term and long-term obstacles exist. In the short run, enforcement of policies can be difficult without adequate oversight by appropriate government institutions, as demonstrated by the Gambella Regional Government’s willingness to sign an “agreement without any coordinates or delineation of the land” (Davidson). Ethiopia additionally faces long-term barriers to policy adoption, since policymakers may worry that – because investors may be unwilling to engage in land deals when governments enforce strict regulations – a slower integration into the world economy can occur. To overcome implementation obstacles, the Ethiopian government must first create agencies specializing in land distribution to foreign investors, since a regional government may not have the expertise in land allocations. Secondly, long-term concerns can be mitigated through decreasing trade barriers in other economic sectors to facilitate international economic integration. Effectiveness of the proposed policy should then be evaluated through Ethiopia’s risk of famine and through adherence to development standards listed by the United Nation’s poverty reduction strategy paper. Policy success can be determined when Ethiopia is able to meet PRSP criteria without incidence of famine.

Ethiopia’s issue of agro-imperialism is rooted in its history of famine. Current policies that promote agribusiness to reduce the possibility of famines, combined with the United Nation’s PRSP, inadvertently elevate the country’s food shortage risks. Policymakers are now debating whether to continue leasing to investors or to terminate investment opportunities. Because both policy options yield positive and negative effects, the Ethiopian government should endorse a centrist approach in resolving the issue. International institutions, such as the United Nations and the World Bank, should work with the Ethiopian government to regulate land distribution under a revised PRSP that focuses on Ethiopia’s specific risk factors regarding famine. Policy effectiveness can subsequently be measured by gauging Ethiopia’s ability to achieve PRSP standards without famine risk.