The German party system is not collapsing. It is undergoing constant change due to changing trends and Europeanization, but it is not collapsing. The system may appear to be dissolving because party membership for all major parties has been decreasing with the exception of the Green party. However, that does not mean the major parties cannot get things done and exercise considerable influence.

The situation, in many respects, is analogous to the difficulties the United States’ party system is facing. Both Democrats and Republicans have been losing party affiliation for decades, and the number of independents is on the rise. However, these two parties are essentially the only parties that are represented on the federal and state levels. This trend has created an interesting electoral dynamic. In party primaries, candidates appeal more to their party base to secure their party’s blessing. Once the actual election campaigning begins, the candidates switch their message toward the center to appear to the growing number of moderates and independents.

A similar situation has taken hold in German politics. Although many members have withdrawn from center parties like the SPD (Social Democratic Party), CDU (Christian Democratic Union) and the FDP (Free Democratic Party) in favor of joining the more extreme left and right parties like Die Linke and the Green party, the center parties still remain the dominant parties. Without question, they remain the senior coalition partners. Although gridlock is a concern, it has always been part of the political process in Germany. Yet, consensus is the principle on how things get done. This principle of governance will always force parties and individuals to come to the negotiating table to pass legislation.

Similar to the dynamics in the United States, parties try to distance themselves from each other during elections. However, this is made difficult by the fact they have to go toward the center in governance. Such a political structure has created an electoral dynamic between the Red- Green coalition (SPD-Green) and the Black-Yellow coalition (CDU/CSU-FDP). Currently, the Black-Yellow coalition holds sway over the Bundestag as evident in the latest election. According to trends in the poll numbers, it appears that this dynamic has replaced the grand coalition norm seen in the early 2000s. The reason behind this development is that SPD and the Green party share more philosophical overlap, in which the SPD is center left and the Green party is a left party. Both are labor friendly and socialistic. In contrast, the CDU is a center right party which advocates for a social market system. Although this is different from the FDP’s support for more of a lassiez faire system, both parties are in agreement with ideas that push for more tax cuts and creating a more favorable business climate.

It can therefore be asserted that the central reason for people leaving the center parties is that citizens are being disenchanted by actions taken by center parties due to current political realities. For example, SPD lost many members when they received welfare. One can make the addendum to this assertion that people now have more divergent views when it comes to different issues. Some people may want to ban nuclear but are pro business. They feel more strongly on nuclear power and therefore join the Greens. Issues in Germany have become quite multi-faceted and can no longer be encompassed by philosophically one-dimensional party platforms. 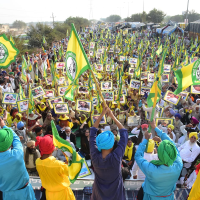