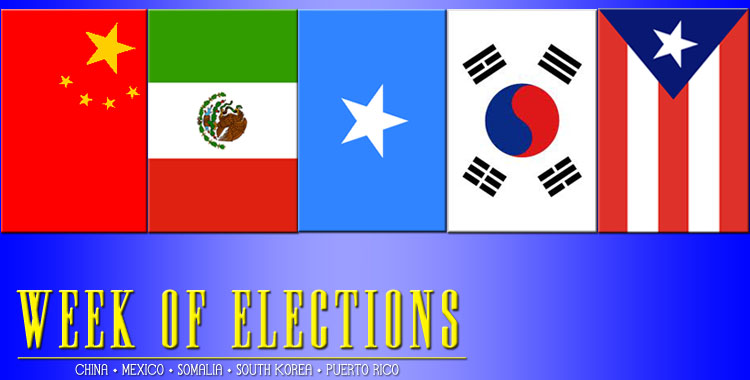 In light of the upcoming U.S. presidential election, we are publishing a series of articles about global elections and transitions taking place in 2012. Join us as we explore a diverse set of countries and the repercussions associated with leadership change by reading our “Week of Elections” series!

Two days after the U.S. presidential election, an event of equal magnitude will take place across the Pacific in the People’s Republic of China (PRC). The Chinese Communist Party (CCP) is on the eve of a once-per-decade leadership transition. A new “fifth generation” of leaders will soon be unveiled at the 18th National Congress to succeed the administration led by outgoing President Hu Jintao, Premier Wen Jiabao and the so-called “fourth generation” of China’s leaders.

However, the leadership transition will not be without its difficulties. While the CCP maintains an outward image of cohesion and unity, deep factional rifts exist within it. These rifts often come to light during generational leadership transitions, as different factions attempt to jockey their candidates into the top positions on the powerful Politburo and its elite Politburo Standing Committee (PSC). Thus, the future composition of China’s highest decision-making bodies will represent a balancing act between the major factions involved in Chinese politics. What follows is an overview of the aforementioned factions and their impact on the impending leadership transition.

The 1997 death of paramount leader Deng Xiaoping signaled the continuation of a gradual yet fundamental shift in the allocation of power in Chinese politics. Deng, like Mao Zedong before him, wielded considerable power in his own hands—so much so that he was able to designate not one but two consecutive successors in Jiang Zemin and Hu Jintao (Li, The Battle for China’s Top Nine Leadership Posts 135). Although they were able administrators and skilled politicians, neither Jiang nor Hu were able to attain the degree of influence exhibited by Deng. Instead, they were essentially—borrowing the Roman term—“first amongst equals” on the PSC (Li, The Battle for China’s Top Nine Leadership Posts 131). Since Deng’s death, political power has shifted from a single all-powerful leader to collective leadership among the members of the PSC.

The decline of strongman politics has in turn led to a rise of two informal political factions that check and balance each other, namely the elitists and the populists. The elitists are a loose coalition of the “princelings” and the so-called “Shanghai clique” (Dotson 6). The former consists of the sons and daughters of former high-ranking officials of the CCP, while the latter rose to prominence due to its close association with Jiang Zemin, who was mayor of Shanghai before succeeding Deng Xiaoping as paramount leader. Most elitists advanced their political careers running China’s wealthy coastal provinces and tend to favor policies that maximize economic growth, promote the interests of China’s business and professional classes, and benefit the coastal provinces (Dotson 6). Among the elitists are presumptive paramount leader and current Vice President Xi Jinping, as well as Vice Premier Wang Qishan, a key figure behind China’s macroeconomic policy (Dotson 6).

The populists on the other hand are supporters of current paramount leader Hu Jintao. Most populists come from less-privileged families and began their political careers in the Communist Youth League, the CCP’s nationwide youth organization (Dotson 6). Their associations with the Communist Youth League gives rise to their Chinese name, the tuanpai, which literally translates to “league faction” (Dotson 6). The majority of the populist faction gained leadership experience running China’s poorer inland provinces, and support policies that favor these interior provinces as well as marginalized social groups such as farmers, migrant workers and the urban poor. Prominent members of this group include outgoing Premier Wen Jiabao and First Vice Premier Li Keqiang (Dotson 6).

To comprehend the degree that factional politics plays in deciding the composition of China’s highest decision-making bodies, one can look at the back-room wrangling that occurred before Xi Jinping and Li Keqiang were admitted onto the PSC during the 17th National Congress in 2007. Prior to the 17th National Congress, paramount leader Hu Jintao presided over a Politburo Standing Committee stacked with members of the elitist faction, particularly those close to retired paramount leader Jiang Zemin (Fewsmith, 90). In order to consolidate his power on the PSC, Hu Jintao elevated his protégé and current First Vice Premier Li Keqiang onto the PSC. However, to bring Li onto the PSC, Hu had to compromise with the elitist faction and allow current Vice President Xi Jinping onto the PSC. Although an elitist, Xi is seen by the populists as an acceptable figure, since he did not possess particularly strong ties with Jiang Zemin (Fewsmith 91). Nonetheless, Xi’s addition onto the PSC prevented Hu from stacking the PSC with his own associates.

Barring any eleventh hour changes, Vice President Xi Jinping and First Vice Premier Li Keqiang are expected to retain their seats from the previous PSC and form the nucleus of the next generation of China’s leaders. Xi will succeed Hu in the triumvirate of posts—General Secretary of the Communist Party, Chairman of the Central Military Commission, and President of the People’s Republic of China—typically held by the China’s paramount leader and Li will replace Wen Jiabao in the capacity of Premier of the State Council, which oversees the governmental functions of the People’s Republic of China. While Xi Jinping and Li Keqiang are considered shoo-ins for the next leadership, the composition of the rest of the next PSC remains unclear. The number of seats on the PSC varies, with the current PSC consisting of nine members. Due to term and age limits, seven of the nine—that is, everyone besides Xi Jinping and Li Keqiang—will be stepping down from their posts at the 18th National Congress. Sources close to the leadership have indicated that the PSC will be cut down to seven positions to strengthen central-decision making, leaving five openings on the next PSC (Blanchard).

The make-up of these last five seats will be subject to fierce deliberation within the Party and will no doubt reflect the factional divide between the elitists and the populists. According to a report released two weeks before the opening of the 18th National Congress, Hu Jintao, Jiang Zemin and Xi Jinping have reached a consensus to elevate Vice Premier Wang Qishan, Director of the Propaganda Department Liu Yunshan, Director of the Organization Department Li Yuanchao, Vice Premier Zhang Dejiang and Tianjin Party Secretary Zhang Gaoli to the PSC (Blanchard). The decision reflects the balancing of factional differences present in the Communist Party. Wang Qishan, Zhang Dejiang and Zhang Gaoli have ties with the elitist faction, and owe their current positions to the influence of Jiang Zemin. Meanwhile, Li Yuanchao and Liu Yunshan are both closely linked to Hu Jintao. Along with incoming Premier Li Keqiang, they will represent the populist faction on the PSC (Li, China’s Top Leaders to Watch). Under this composition, Xi Jinping will preside over a PSC divided evenly between populists and elitists. However, even this consensus is not final, as it is subject to veto from party elders who may have their own designs on the composition of the PSC.

Whatever the final composition of the PSC, one thing is certain. The seven men gracing the stage of the Great Hall of the People at the conclusion of the 18th National Congress will face unprecedented challenges in governance. The economic reforms established under Deng Xiaoping more than three decades ago have lifted millions of Chinese out of poverty while transforming the country into the world’s second largest economy. In recent years however, economic growth has diminished to its slowest pace since the global financial crisis. With lackluster demand abroad and rising labor costs within, China’s export-oriented economy has become unsustainable in the long run. In addition, a widening gap between the rich and the poor along with rampant government corruption have set the stage for greater instances of social unrest, threatening the CCP’s political legitimacy. Addressing these challenges will require bold economic and political reforms that have been largely absent in the last decade. Whether or not the new leadership will set aside political differences and develop the resolve to carry out these reforms is a question for the months to come.

Photo by Foreign and Commonwealth Office